Kasese to get a Shs24m ICT centre 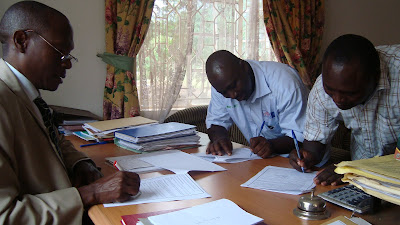 KASESE district is to get Information and Communication Technology (ICT) equipment worth about shs24m, from the Rwenzori Information Centres Network, (RIC-NET).RIC-NET is supported by the Dutch Humanist Institute for Cooperation with Developing Countries (HIVOS) and the European Union.
The equipment, which will include twelve computers, a multipurpose photocopier that will also serve as a printer and scanner, will be stationed in the District Information Office at Rukoki, the district headquarters.
A Local Area Network and internet services will also be set up to facilitate information-sharing between the district, the civil society organisations and other stakeholders in and outside the district.
The ICT facilities will be part of the information Desk that the two sides have agreed to set up under the Public-Private Partnership that the district and stakeholders mooted in 2006. The equipment is to be hosted by the District Information Office, which the district is expected to equip with furniture.
This is contained in an agreement signed between RIC-NET and Kasese district Local Government November 25th at a ceremony that took place in the office of the district Deputy Chief Administrative Officer (DCAO).
The support is being provided under the auspices of HIVOS and the Europena Union, the funders of RIC-NET.
The Deputy CAO, Willy Bataringaya and the RIC-NET boss, John Silco Murugahara, signed on behalf of their respective organisations at the function, which was witnessed by the Coordinator Rwenzori consortium of Civic Competence, James Mwrima and the District Information Officer.
John Silco Murugahara said the equipment would be delivered around 4th December.The agreement, that is valid for the 24-months, follows a series of partnership activities between Kasese district and RIC-NET, which has included a dialogue meeting in June this year and training of select district and civil society staff in web 2.0 tools that took place at Kabarole Information Centre.
The dialogue and the training were facilitated by the International Institute for RIC-NET is also in the process of helping Kasese district to revive her district website (http://www.kasese.go.ug) and in the creation of the d-group (an electronic platform for information-sharing among stakeholders in and outside the district accessible on http://rwecovoice.blogspot.com.
RIC-NET will also train district heads of department in web content development and information sharing tools including sms messaging skills.
By John Thawite
Posted by Kasese District News at 16:55

FORMER army commander Maj. Gen. James Kazini is no more.
Kazini was allegedly murdered by his girl friend, Lydia Draru, in Namuwongo, a Kampala suburb, during a scuffle at her residence yesterday morning.

Draru was arrested and whisked away to the Kampala Central Police Station where she was held together with her cousin, a girl in Senior Six.

“We are treating it as an outright case of murder,” said Edward Ochom, the director of criminal investigations, who rushed to the scene of the crime.

Kazini, whose army number is RA 0133, had been one of the longest serving army officers.

The circumstances surrounding his killing remained unclear yesterday. However, both the Police and security sources said Kazini was killed by a blow on his head with a blunt metallic object during a domestic quarrel between 5:00am and 6:00am.

An iron bar believed to have been used in the attack was recovered at the scene.

Police officers dusted the place for fingerprints and collected other exhibits.

The blow left a deep gush on the general’s head, causing him to bleed to death. Wearing a yellow shirt, the general, who had a career of mixed fortunes, died in the doorway of the house he was renting for the girlfriend.

For several hours, his body lay in a pool of blood as a combined force of the Police and the army sealed off the place while detectives and experts from the Government analytical laboratory went about their duties.

As news of the death filtered through, several senior people, among them the Inspector General of Police, Maj. Gen. Kale Kayihura, and trade minister Kahinda Otafiire visited the scene.

Kazini’s wife Phoebe arrived at about 9:00am. She saw the body and broke down, weeping uncontrollably. Hundreds of shocked residents trooped and gathered outside the house. Just before 10:00am, the body was removed and transferred to Mulago hospital for a postmortem check.

Eyewitness said shortly after the murder, Draru walked to a nearby boda boda stage and declared that she had killed her husband. She then reportedly asked the cyclists to inform the Police.

“She told us that she had killed her husband and she did not care,” Bernard Turinabo, a cyclist who was at the stage, recounted. “She even told us to go and see the body.”

It is then that the Police rushed to the scene of crime and arrested her. During arrest, Police sources said, Draru openly confessed: “I have killed him and I don’t care where you take me.”

It is said that the two had returned home in the wee hours of the morning. It is not clear what triggered the disagreement. Shortly before returning home, the two were sighted at International Hotel Muyenga.

They reportedly rode back home in the general’s latest top of the range Toyota Land Cruiser, bearing a Southern Sudan registration number plate, which they parked outside before walking into the house.

Police sources yesterday said Draru, who is popularly known by residents as Munene, earlier claimed that she acted in self-defence after the general allegedly drew a pistol on her. But no pistol was found in the house. Instead, Kazini’s pistol was discovered several hours after the incident in his brown hand bag in the Land Cruiser.

Emotions ran high outside his compound. A man wondered how a general who had emerged triumphant from various battles could die at the hands of a woman.

The demise of Kazini left many of his colleagues disturbed. The Chief of Defence Forces, Gen. Aronda Nyakairima, yesterday described his death as untimely. The nation and the UPDF as an institution, he said, were still to benefit from his enormous experience and skills.

“We were still to work together as an institution to consolidate peace and stability. What we are seeing now is the passing on of a patriot, a hardworking man and a committed nationalist,” Nyakairima said.

Kayihura, whose relationship with the deceased goes back to the NRA bush war, said Kazini played a heroic role in the difficult history of the country, his woes notwithstanding.

“There is no doubt about the contribution Kazini had towards achieving peace and security in the country. He played a crucial role in fighting various insurgencies, right from 1986 up to when he became army commander. Obviously he had problems but that cannot wash away his tremendous contribution to this nation,” Kayihura said.

“He served through the ranks in various capacities. In some, he performed well and in others, just like many of us, he did not. It is unfortunate that he has passed on still young. As for those other issues in the army, we leave that in the hands of God.”

In March 2008, Kazini was convicted and sentenced to three years imprisonment for causing financial loss of over sh61m to the Government. He was still battling in court to overturn his conviction.

Kazini was also facing a string of other charges that included causing financial loss, forgery, uttering false documents, conspiracy to defraud and disobedience of lawful orders. But his trial by the Court Martial was put on hold after he petitioned the Constitutional Court challenging the legality of the trial.

The Constitutional Court dismissed his petition mid last month, clearing the army court to try him.
Posted by Kasese District News at 13:30

Family and security sources say General Kazini was killed at his girlfriend's home in Namuwongo, a Kampala suburb near this newspaper’s offices on 8th Street, Industrial Area.

The girlfriend has been arrested and taken for questioning at Kampala Central Police Station. Mourners, among them military officers and relatives, trickled in to the Namuwongo residence as the shocking news spreads.

The country was preparing for the burial later Tuesday of vice President, Prof. Gilbert Bukenya’s son, Bryan, who died at the weekend after suffering serious head injuries in a motor crash.

By 8:00 a.m. his body had not yet been moved. Senior Police detectives arrived shortly after to take notes and examine the crime scene. Later, at about 10 a.m, his body was taken to Mulago Hospital mortuary.
Posted by Kasese District News at 18:59