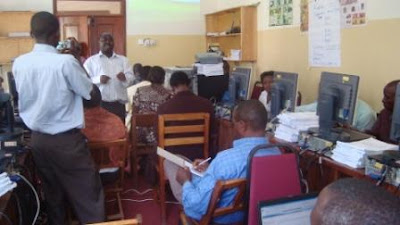 Photo by John Thawite
Technology for its own sake is not useful unless it is used to improve human welfare, a Soltec officer has said.

Erisania Kibaya, the firms executive director said this today while training over 30 participants from Kasese District headquarters and represntatives from civil society orgaidsationss district civil servants about an electronic library (e-library) that is being developed for Kasese District Local Government. 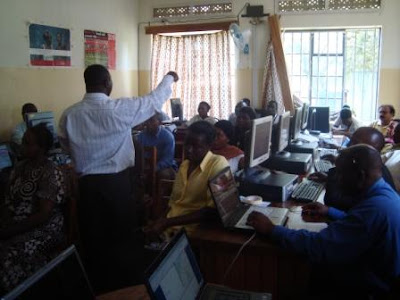 THE cultural leader of Obusinga Bwa Rwenzururu has called on the Government and development partners to link farmers in the Rwenzori region to markets.

Charles Wesley Mumbere noted that though the farmers were spending a lot of time, finances and other resources in farming, they were earning little from agriculture because of limited market opportunities.

In a speech read by his information minister and spokesperson, Patrick Nyamunungu, Mumbere urged his subjects to revive the culture of constructing granaries to ensure food security in the region.

Nyamunungu delivered the speech at Hotel Margherita on Friday at the closure of a two-day grain business show
Posted by Kasese District News at 18:47

THE Rwenzururu kingdom has been cautioned against using force to acquire land for the cultural institution.

“A uniting kingdom of the people around the Rwenzori mountains was not in place until Isaya Mukirania Kyibanzanga I was installed by all the chieftains in the region in 1965.

“Therefore, the kingdom did not have land of its own as an institution,” Omusinga (Rwenzururu king) Charles Wesley Mumbere observed.

He referred to the recent bickering between the Obusinga bwa Rwenzururu administration and an investor over land on Base Camp Hill overlooking Kasese town centre.

Mumbere noted that the institution, which was officially recognised by the Government last year, had 30 acres of land in Kasese town.

He was addressing about 500 guests at his palace in Kasese town at the commemoration of the death of his father, Isaya Mukirania, on Thursday.

Mukirania, who died on September 2, 1966, was the first uniting king of the Bakonzo (Bayira) and Bamba around the Rwenzori Mountains.

Mumbere described his late father as a hero of freedom, unity and peace and called on his subjects to maintain the prevailing peace in the region.

Every September 2, hundreds of Rwenzururu subjects and officials walk over 20 kilometres north of Bwera town to Bulemba hill in Kasese district to pay their respects at Mukirania’s grave.

The Uganda Wildlife Authority has put up a permanent tourist shelter at the place located within Rwenzori National Park.
Posted by Kasese District News at 18:45