Prioritize the Education of children in the District

The Kasese District Vice chairperson Mrs. Naume Mbambu has appealed to all Education stakeholders in the district to prioritize the education of children in the district if they are to have a bright future.
Mrs. Naume Mbambu made the remarks last evening while presiding over the Go to school, back to school, and stay in school campaign at Kyabarungira Primary school in Kyabarungira sub-county, Kasese district.
Mrs. Naume called for collective efforts from parents, teachers and children such that the education standard in the sub-county and the entire district is uplifted.
She encouraged all school going children especially the girl child to desist from practices that would hinder them from their education progress.
An official from the Kasese district Education department Mr. Constantine Baluku urged school going children to be focused, and ensure that they complete school describing Education as a future investment.
The function which was organized by the Girl’s Education Movement (GEM) was characterized by pupils matching with a band from Kyabarungira Primary school to Rwesande trading centre and back.
A debate between the education stakeholders including parents was also organised. During the debate participants discussed the motion “ignorance of parents about the importance of girls’ education is the leading barriers to the girl’s education”.
The launch of the campaign attracted participants from Kyabarungira Primary school, Kiribaho Primary school, Kabatunda Primary school, Kiribaho SDA Primary school, Kasambya SDA Primary school and Bwesumbu SDA Primary school among others.
Posted by Kasese District News at 10:21

MEMORIES OF TAREHE SITA CELEBRATIONS IN KASESE ON 6th FEB 2012 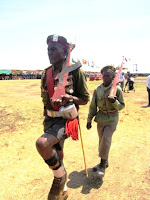 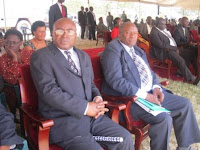 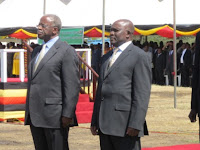 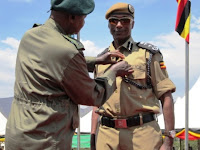 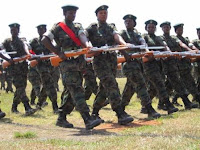 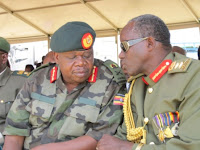 The NRM Government together with the NRA Celebrated the 31st Anniversary since they started the battle which led to their victory and also the liberation of Uganda. The main celebration took place in kasese District on 6/2/2012.The President of the republic of Uganda was the cheif guest.

Here is the Pictorial
Posted by Kasese District News at 12:08

Hiking of Mount Rwenzori through the Kilembe trail has been suspended following an alpine fire out-break in the famous western Uganda Mountains.
The director Rwenzori Trekking Services (RTS) that runs a concession through the Nyamwamba-Kilembe valley to the Mountain peaks Mr. John Hunwick said that some of his facilities have been burnt down.
He said that he was in the Mountain by the time the fire broke out in the Mountain on Monday last week.
“I had some more than 20 clients in the Mountain by the time the fire broke out but we managed to rescue them to safety in the shortest time possible and they are safely out of the Mountain” Hunwick said.
He said that he had stopped taking tourists up in the Mountains through Nyamwamba –Kilembe valley until the fire is under control and other facilities restored.
He said that the fire was moving about eight kilometers per hour adding that by Saturday evening an estimated 30-40 kilometres of forest cover had been burnt at 4600 metres above sea level..
He added that much as one of his tented camps had been burnt some were rescued and dismantled and hidden into the rock shelter for safety.
A director with a UK based tour organization- Warthog Mountaineering Mr. John Howie who was in the mountain with a group of about fifteen tourists by the time the fire broke out asked the government of Uganda to urgently put in place efforts to put off the fire.
“I am wondering that such a mountain of world importance has not been given urgent attention by government to control such a disaster” Howie told the New Vision at Sandton hotel in Kasese on Sunday.
Rwenzori Mountains were declared a world heritage site in 1996 by UNESCO.
He said that he was leading a big international trekking group with 2 French, 2 Newsland and 15 from the United Kingdom.
Howie noted that it was irresponsible for the Uganda Wildlife Authority (UWA) to allow people to go in the mountains now that the fire was still burning.
“I feel that the park should be closed to the clients until the fire is put off” Howie suggested.
However the senior warden in-charge Rwenzori Mountains National Park Fred Kiiza said that UWA had dispatched a team of fire fighters including the Uganda People’s Defence Forces (UPDF) to try to fight the fire.
“We may not fight to put off the fire now but we want to create fire breaks so that it does not cross to burnt the whole forest”
He announced that plans have been put in place to compensate clients that had missed the hike.
‘” We have decided to give free extra nights to tourists who may wish to go back to the Mountain and we have also offered them an alternative to visit Queen Elizabeth National park and Lake Mburo” Kiiza added.
He said that the park would not close because the fire had not crossed to Mubuku valley side where a central circuit to the peaks is safe. He said that the fire may have been caused by poachers.
By Sunday evening fire was seen from Kasese town view heading down wards to the community.
Some people have described the fire as the first ever in the history of Rwenzori Mountains worrying that it would affect the ecosystem there.
Posted by Kasese District News at 09:13