Hon Dr Chrispus  Kiyonga has helped raise 30 million shillings for Munkunyu senior secondary school. This was at a function held at the school on Sunday 21/9/2014. Kiyonga made a contribution of 3 million shillings.

Kiyonga who is the Minister of Defence and MP Bukonzo west commended the students of Munkunyu secondary school  for their good discipline displayed during the function. The students were orderly and assisted with lifting of items that were bought by the people attending the function. Kiyonga urged the students to study hard so that they are assured of a good future.

Observing that the NRM government had provided the basic facilities for the teaching of science, Kiyonga requested the secondary school head teachers in the district to ensure that the teaching of science was strengthened. Kiyonga expressed happiness that virtually all Government secondary schools in the district had science laboratories  and computer laboratories for teaching computer science to the students.

Referring to the tragic events of 5/7/2014 when over 100 people were killed in Bundibugyo, Ntoroko and Kasese, Kiyonga told the people the young people that went to attack an army barracks in Bundibugyo had been deceived that witchcraft would protect them from bullets. Kiyonga therefore told the students that they should always be guided by science and not witchcraft.

The Minister of Defence advised the people to be security conscious and avoid holding function at night. He advised religious groups to hold conventions during the day and not at night. According to Kiyonga terrorists like ADF could use explosives and kill people at such function. Kiyonga also warned against hawkers going deep into the villages,advising them instead to sell their goods in the trading centres. Kiyonga indicated that such people could use the pretext of hawking to collect intelligence for terrorist and rebel elements.

Elaborating on achievements of the NRM Kiyonga outlined
Affirmative action which has led to the fact that now in schools the number of girls is equal to the number of boys. In addition the NRM had improved roads healthcare,education,security and extended electricity to the villages. Kiyonga therefore urged the people to support President Museveni and the NRM

On wealth creation, Kiyonga once again appealed to the people to plant more coffee and mangoes. He illustrated that 1000 trees of the new BUKULIRO coffee can earn one 15 million shillings annually. Accordingly with such income parents would support the education of their children.

Due to the good discipline shown by the students, Kiyonga promised to return to the school at a later date and have a meal with them and give them further advice.

Posted by Kasese District News at 09:28


The Rwenzururu Kingdom leadership has today made its position on the 5th July attacks during the stakeholders meeting called by the Rwenzururu Premier Rt. Hon. Noah Nzaghali at the Kasese district Mult-purpose hall in Kasese town.
The meeting Chaired by the Speaker of the House of representatives Rt. Hon. Enock Muhindo committed itself to ensure that peaceful co-existence between the people across the region prevails. 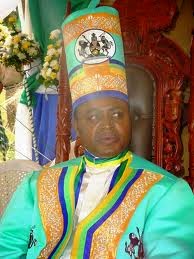 The Mayor Kasese Municipality Godfrey Kabyanga gave some of the key resolutions the meeting agreed upon.

Prince Christopher Kibanzanga attributed the 5th attacks on lies adding that those who participated in the attacks were deceived and misled by people whom he said had selfish motives. He refuted allegations that they have been bought by Government adding that they have decided to talk the truth to save the Banyarwenzururu who are suffering as a result of the attacks.
Prince Kibanzanga however, said that he was happy that the Obusinga Bwarwenzururu has pronounced itself on the matter.

The Kasese district Chairperson Lt. Col. Mawa Muhindo observed that the Rwenzururu Kingdom has a lot of responsibilities it is supposed to do including re-focusing the people work hard for development. He also advised the Kingdom to establish an internal security with in the Kingdom to monitor and report wrong elements to Government such that peace and harmony can prevail in the Kingdom.

The meeting also enornemously agreed that this year’s coronation anniversary be commemorated despite the challenges in the Kingdom. 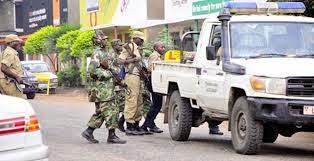 Rwenzururu Kingdom will tomorrow commemorate the day the 1st. King Isaya Mukirania died. Prince Kibanzanga who had wished that the day be postponed because some of the Kingdom officials are still detained advised that the day can be commemorated at St. Paul’s Cathedral to pray for Peace and the souls of those who departed in the 5th July attacks.
Posted by Kasese District News at 13:32

Police at Railway Police post has in detention two men for allegedly stealing chicken and scrap in Railway Ward.
Speaking to the OC railway police post this afternoon, Aggrey Kapere confirmed the information and identified the suspects as, one Zebedde Mumbere and Mohammad Muhindo, residents of Kikonzo cell in Railway Ward in Kasese Municipality.
Kapere said that the suspects were arrested after a tip off, and later discovered allegedly with three stolen chicken and metals belonging to a yet to be identified person.
He called on the vigilance of the landlord before renting their houses, lest, the security of the area was to be compromised.
He called on the local leaders to intensify their surveillance on the operations of the youth before the situation turns more worse.
Kapere, observed that the fact that cases of theft were on the increase, was a clear indication of reluctance on the part of the local leadership, parents and the community.

Posted by Kasese District News at 13:23