Media houses have been encouraged to sensitize the people on the need
to have unity of purpose for the country, working hard and maintaining
peace.
The challenge was sounded by the Minister of Justice and
Constitutional Affairs, Gen. Kahinda Otafire while officiating at the
10th Anniversary celebrations for Kasese Guide Radio held at the
Catholic Social Services Grounds in Kasese town.
Gen. Otafire said that the people in the Rwenzori Region and Kasese
district in particular needed to know that they were one and therefore
issues related to tribalism should not be reflected anywhere.
He asked the people to only fight for their rights as Ugandans Africans.
Otafire also implored the media houses in the Rwenzori region to
remind the people that they were still backward and hence they needed
to use the God given resources and knowledge to create wealth and make
development.
He used the same platform to tell the people that government
absolutely has no problem with the Rwenzururu Kingdom and appealed to
the institution’s subjects to continue cherishing their valves.
He cited need for the people in the district to forget the past and
work towards restoring their relationship with government.
The Kasese District Vice chairperson, Mr. Gideon Sanyu Ntabose hailed
the different listenership clubs for having created unity among the
people in the district.
According to Ntabose, the Radios have been playing some vital roles
including evangelizing the people spiritually, socially and
economically.
The Kasese Municipality Mayor, Godfrey Baluku Kabyanga who hailed the
Retired Bishop of the Catholic Diocese of Kasese, the Rt. Rev. Fr.
Egideo Nkaijjanabwo for his vision of beginning the Radio, also said
that very many people have been served with the right information.
Kabyanga also reported that for the last one and half years, the
district has been peaceful and asked the people to protect and observe
peace.
He warned the women against the act of moving alone, adding that
kidnappers have increased.
He appealed to the government to divert some of the Operations Wealth
Creation money to organized groups like listeners.
ENDS.
Posted by Kasese District News at 09:29


Journalists in the Rwenzori region have been challenged to deeply understand how government operates in order to write a balanced and accurate story from government offices.
The challenge was sounded on 25th April 2018 by the Assistant Chief Administrative officer in-charge of Busongora County, Mr. Wilson Asaba Mwigha while speaking to Kasese based Print and Radio journalists attending a two days capacity building training at the E-Society Resource Center at the district Headquarters in Rukoki in Nyamwamba Division Kasese Municipality. 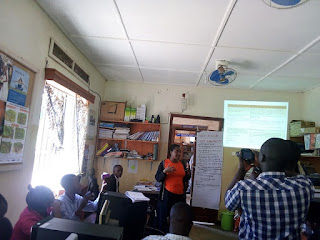 The training that ended on 26th April 2018 was organized by The E-Society Resource Centre and supported by The Collaboration on International ICT Policy in East and Southern Africa (CIPESA). The training  aimed at equipping journalists with ICT skills on how to report about parliament and local government structures. 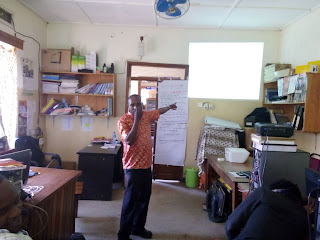 Mr. Mwigha told the journalist that government through three arms of government that includes the Judiciary, Legislature and Executive could not efficiently execute its mandate without the media, a reason why journalists should be aware of how the government operates.
However, Mwigha said that government has put restrictions on access to information asking the fraternity that is charged to inform, educate and entertain to follow the guidelines if they were to perform their roles rightly.

Loice Kyogabire, the Programs Coordinator attached to Collaboration on International ICT Policy in East and Southern Africa asked the journalists to use the media critically to address issues affecting the community. 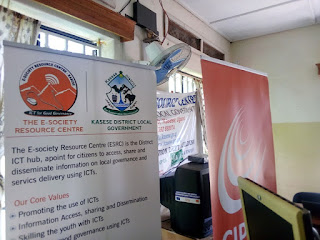 Audios can be downloaded on https://soundcloud.com/user-526628332/ and search for E-Society

Posted by Kasese District News at 08:58