THE Rwenzuru cultural leader, Omusinga Charles Mumbere, has appealed to President Yoweri Museveni to firmly deal with corruption in the Government.

“Since President Museveni came to power, there has been peace in most parts of the country. The problem has been corruption right from top government officials to the grassroots,” the Rwenzururu leader said.


He made the remarks on Sunday when he received Kidima Mubarak, an Australian born in Kasese district, at his Royal Palace office in Kasese town. Mubarak was accompanied by his wife, Salima.

Mumbere noted that a leader cannot successfully fight poverty among the rural poor amidst corruption orchestrated by top government officials who are supposed to implement and supervise government programmes.

Mubarak told the Omusinga that he wanted parental blessings as he aspires to contest for a seat in the Australian parliament in 2012.

He, however, complained that he had secured some computers from friends in Australia for schools in Kasese but found that some of them did not reach their intended schools.

Mubarak also urged cultural institutions in Uganda to fight negative social practices such as corruption that have come with modernity.

By John B.B.Nzinjah
Posted by Kasese District News at 15:42

Local leaders in Kasese have threatened to de-campaign anyone who will support the dismissal of the Anti-Homosexuality Bill currently before parliament.

The Bill, tabled by the Ndorwa West Member of Parliament David Bahati, has generated too much debate and disagreement across Ugandans.

On one hand are politicians who believe that homosexuality is a western culture that has been introduced into Uganda to destroy the family structure and the wider society. And on the other hand are those who say the Bill is inhumane by prescribing death sentences for homosexual acts and want government to concentrate on other issues like corruption and better public service delivery.

He said cultural leaders in Uganda will lobby government to reject foreign assistance that is tagged to the support of homosexuality.

Elijah Kyetunda, the Busongora North Member of Parliament who appeared together with Kibanzanga on the same talk show said he would not forgive government if the Bill is not passed.

Both politicians called on the public not to support anyone proposing the rejection of the Bill.PS: for the other face of this story See:

Residents of Kilembe Sub County in Kasese district have protested the
threats of evictions by the management of Kilembe mines limited.

Residents say they are the indigenous occupants of the land on where
the mining activity is being done.

"We shall not get intimidated by these scarecrows of Kilembe mines
when we are very much aware that we are occupying our ancestral land,"
the residents charged.

They revealed this on December 3 after the management of Kilembe mines
limited called for a meeting and later failed to turn up.

According to the locals, the general manager Kilembe Mines Limited
(KML) Mr. Kyakony Fred called for the meeting on December 3 at 10 am
to discuss on the safety, theft of company properties and encroachment
on the company land but later delegated the company security manager
Mr. Gideon Kusemererwa in company with the police community liaison
officer at around 3pm.

Soon as the CLO took over his seat, the locals ordered the LC III
chairperson who was chairing the meeting to leave all the business and
dispersed leaving the police and Kilembe mines security manager
stranded on ground.

Locals lead by the sub county chairperson NRM Mr. Katya Nickson said
that the management of Kilembe mines has blocked the area from
development because of keep on threatening them that they are facing
eviction at any time.

He said Mr. Kyakony the general manager do overlook them the reason he
called for the meeting and adamantly refuse to attend it.

Katya dismissed allegations that conflicts are linked to politics as
the chairperson of the sub county belongs to FDC saying that all
parties are being affected by the way Kilembe mines is treating them.

Muhindo Binadamu the chairperson youth council kasese district and an
NRM cadre said that Kilembe is always at log heads with locals
accusing them of stealing their property that is not the case as the
properties are being stolen and vandalized by senior company
employees.

He said the company has never arrested any suspect with stolen
property from Kilembe but locals have been participating in arresting
the senior employers of the company with stolen materials and company
properties.

"you can imagine we even have a list of Kilembe mines officers who
have been caught stealing company properties but no one has ever been
prosecuted but are harassing us for nothing" Binadamu charged.

while speaking to this reporter the security manager Kusemererwa
Gideon said that Mr. Kyakony whom the residents demanded to see in the
eye was busy attending another busy meeting at kasese Cobalt Company
limited.

The District Community Liaison Officer Mr. Musana Joseph described
the protest by locals as a terrible one adding that the worst might be
in waiting.
By Wilson Asiimwe in kasese

Posted by Kasese District News at 13:49

The Executive Chairperson for People's Progressive Party (PPP) Jaberi
Bidandi Ssali has rapped the recent formed Inter Party Coalition by
opposition political parties in the country as wastage of time.

Bidandi also a presidential hopeful said the coalition was not a
demand for members of the parties but only a thought and a dream by
selfish politicians who heads different parties.

He was addressing party members and launching of the party office in
Kasese district on December 19.

He said he could not join the coalition because most of its members
are failures that have lost the ground and that others are those
parties that exist by names in Kampala only but without members.

While in Kasese Bidandi held meetings in the FDC strong hold
constituencies of Bukonzo East and Busongora North.

He said the coalition will never agree 100 and even in other issues
but only on agenda which is becoming song of the day adding that at
the end of the members end up in exile and being imprisoned.

"People have always have coalitions but the end result is death for
the members so it was good to confront death when you already know,"
Bidandi said.

He cited the history of Kabaka Yekka (KY) and Uganda people's congress
that made a coalition to remove Ben Kiwanuka and the end result was
for Obote to abolish kingdoms to punish the Kabaka, the coalition that
toppled Amini which also failed after Obote re captured power and
forced Museveni to go to bush.

He said his party is well prepared to see Museveni waving at Masaka
residents after 2011 general elections as he heads to his country home
Rwakitura to look after his cows.

Bidandi challenged the public to produce evidence where he was cited
in any corruption scandal and promised a big reward.

He said the movement government has committed a lot of crimes than
that of Amini and Obote two governments.

"During Amini and Obote's regimes people died and blood was shed but
there was no theft, land grabbing and their families to take over
control of state unlike the NRM where the presidents family is in
charge of the country," he charged.

He lashed at NRM government and president Museveni of creating safe
houses and illegal detentions that was a major cause to fight the past
regimes.

Bidandi condemned the manner in which WBS T.V presenter Serumaga was
arrested recently.

"You people i cried, i got stigmatized on witnessing the TV journalist
being forced into the car boot but had no option," Bidandi said.

Posted by Kasese District News at 13:46 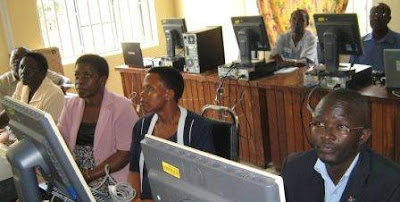 Objective: To enhance effective and efficient information sharing mechanisms between the Kasese District Local Government and the Civil Society

The district web site will provide information systems support for core business and regulatory functions, particularly in the areas of regulation and revenue generation in the district.
The web site will also provide convenient and easy access to other information services on opportunities that people in both urban and rural areas can access to improve their living conditions in the Kasese district.


Posted by Kasese District News at 16:06 No comments: