POLICE in Kasese are holding of their own on charges of alleged defilement charges.

The Kasese district officer in charge of criminal investigations department Abas Seenyonjo confirmed the developments when contacted for comment Jan.27 but declined to divulge the details of the case.

Ssenyonjo declined to reveal the identities of the suspect but our reporter has since established his identities from other sources as Sam Thembo the officer in charge of Kiburara police post in Kisinga sub-county Bukonzo county Kasese district.

According to the source within the police force which never wanted to be named because he is not authorized to talk to the press Thembo was picked from his place of work on Sunday and by press time he was still being held at Kasese police station as investigations continue.

Ssenyonjo said once investigations are complete Thembo’s file will be sent to the resident state attorney who will prefer charges against the accused and sanction if for court proceedings.

The CID boss decried of rampant cases of defilement in the district.

He however noted that some parents of the defiled girls report to police after negotiations with the suspect’s failure to pay the negotiated amount of money.

He said there is need for massive sensitization of the general public on the dangers failure to report defilement cases to relevant authorities.
by Michael Karugaba in Kasese
Posted by Kasese District News at 18:43 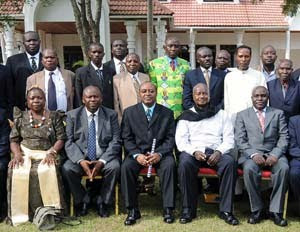 During the meeting held at his country home in Rwakitura in Nyabushozi county in Kiruhuura district, Museveni hailed the people of Rwenzururu for resolving their differences that led to the restoration of the kingdom.

A statement issued by State House yesterday said the President also appealed to the group to resolve other issues peacefully to ensure unity in the kingdom.

“Museveni told Mumbere that neither him nor the National Resistance Movement (NRM) have ever opposed the restoration of the Obusinga bwa Rwenzururu as portrayed by elements that are opposed to the Government,” the statement said.

The President, it added, “clarified that the delay in restoring the Obusinga was caused by disagreements among the different groups in the kingdom, with some of them in support of the institution while others opposed to it.”

The statement added that President said the Government supports the restoration of any cultural institution as provided for under Article 246 of the Constitution.

He also assured the kingdom of Government support.

On the increase in unemployment among the youth in the area, the President called on the Rwenzururu leaders to advise the youth to undertake marketable courses especially in science and technology.

Mumbere commended Museveni for supporting the Rwenzururu kingdom and for enuring that the prevailing peace and development in the area.

“Mumbere assured the President that the Obusinga bwa Rwenzururu will continue to work with the Government to steer development,” a memorandum by the king read.
Posted by Kasese District News at 14:17