The Kasese district vice chairperson Naume Mbambu has challenged men to always attend to places of worship if many of them are to reach the Kingdom of heaven.

Speaking shortly after the service at Base Camp church of Uganda in Kasese Municipality today, Mbambu said most men have backslidden in faith because they rarely attend to churches on Sunday.

Mbambu noted that majority of the women have managed to overcome earthly challenges because they always go church to praises and pray to the almighty God.

She said that women should stick to the faith in God in order to have stable and productive families.

In his preaching, the lay leader of the church Joshia Kighotha urged Christians to always pray for the needy especially those in prison who need the mercy of God as they serve their sentences.

Kighotha added that prisoners also need the word of God in order to repeat the sins they committed so that they can quickly be rehabilitated when released.

Posted by Kasese District News at 09:27

Police in Kasese are investigating circumstances under which
cultivators attacked pastoralists in Muhokya sub-county over a
disputed land.

According to the Deputy Commander of the Field Force Unit in Kasese
Charles Sanya, three other cows were injured in the overnight.

The officer in Charge of Criminal Investigations at Kasese Central
Police Station Alex Ojok also confirmed the attacks saying police
officers have been deployed in Muhokya to bring the situation to
order.

Ojok said that so far no one has been arrested since the attackers
took off with cow and goat meet over night.

The CID however, said five cultivators who engaged the pastoralists in
another fight yesterday afternoon are in custody and will be produced
in court tomorrow.

He said that a pastoralist who was injured in yesterday afternoon
engagement was being treated at Kilembe Hospital in critical
condition.

The disputed land is being claimed by Alex Kabalira of the Bahira clan
who say they are the ridge leaders of the area.

Both sides have not adhered to the order of the Kasese Deputy RDC
Aminadabu Muhindo who said no more activities be carried out until an
amicable solution is reached.
Posted by Kasese District News at 14:06

This has been one of the busiest seasons in Kasese town. It has been observed that kasese town has registered the highest number of visitor buses and coasters carrying students on study tours and other visitors of different caliber from different parts of the country.Among the places frequently visited have been; Hima Cement factory, Kilembe Mines, Kasese Cobalt company, Mubuku irrigation scheme, Queen Elizabeth National park,Rwenzori mountains, Lake katwe,Edward,George and Kazinga channel to mention but a few. The appeal goes to the general public, to embrace this opportunity to develop the region by good infrastructures and provide a conducive environment for visitors and also support tourism in Uganda.
Posted by Kasese District News at 10:05

E-Society Resource Center is a unique project, said Mr. Peter Barnard, the Country Director of VSO-Uganda who visited this center on 16th August 2011, located at Kasese District Local government in the education department building in Rukooki. He was accompanied by Dr Sarah Kyobe, the Program Officer (Health) of VSO. 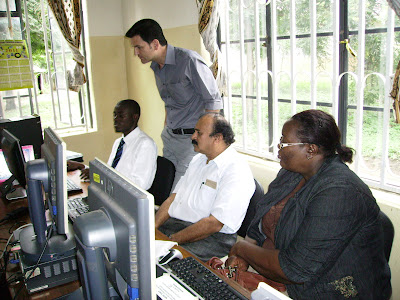 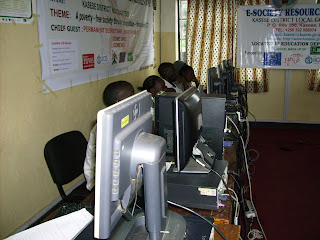 The center has a technical Lab where IT training is being conducted by capable trainers like Mr. Yosia Baluku and Mr. Mukamba Samuel Mumbere, The centre also has designed web portals like www.kaseseelibrary.org for the local government department who can upload their static and dynamic content like government announcement, annual reports, memos and budgetary provisions in order to make their transparent transaction easily seen by the civil societies. To strengthen the content capabilities of CSO, the center also designed a web portal www.kasesecso.org, through which CSO can share the voices of civil societies and citizens of Uganda.

Mr. Rajamohan, the Information System Adviser for RICNET and VSO volunteer received VSO delegates and detailed the center activities. Mr. Yosia Baluku, the IT Officer demonstrated the web portals of the center and related how the portals could be useful to the government and the civil societies. Mr. John Thawite, the District Information Officer of Kasese District Local Government welcomed the visitors and also shared with them the establishment of the center.

Posted by Kasese District News at 15:05

Staff that diverted allowances meant for Kasese district councillors will be brought to book, the district chairman, Lt. Col. Dula Mawa, has vowed. He said this while meeting aggrieved councillors and technical staff in his office on Friday. Mawa promised to help the complainants recover their money. The councillors are claiming arrears of sh39m. Officials from the finance department said the money was diverted to pay gratuity arrears for the 2008/2009 financial year.
Mawa said whoever is found guilty of causing the mess would be held responsible.
Posted by Kasese District News at 12:17

Kasese District has enlisted the highest number of UPDF cadet and recruits.

Authorities in Kasese Municipality have been shocked by the poor sanitation and health situation in the district police barracks.

It was also found out that police officers had allegedly connected electricity illegally with live wires over each other.

Read more on the link
Posted by Kasese District News at 11:20