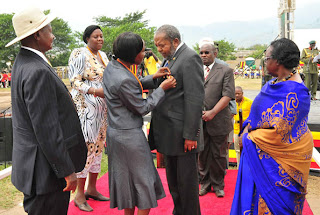 The 50th National Independence Golden Jubilee medal that was approved by President Yoweri Museveni last year was yesterday launched with a decoration of different people at the 27th NRM anniversary celebrations in Kasese town.
The new medal whose list has over three thousand chosen recipients is for those people who have contributed to the development of Uganda since Independence on October 9th 1962.
President Yoweri Museveni and four former heads of state have received this medal that will be given out to the beneficiaries at different occasions this year.
Former president Idi Amin was left out of the list of the former heads of state who received the medals that were announced by the Chairman of the National Medals Committee General Elly Tumwine.
Former presidents whose family members received the 50th National Independence Golden Jubilee Medals include Sir Edward Mutesa II, Dr. Milton Obote, Prof. Yusuf Lule, Gen. Tito Okello and Godfrey Lukongwa Binaisa all deceased.
Others who received the medal include Omusinga Charles Wesley Mumbere, Prime Minister Amama Mbabazi, Vice President Edward Sekandi, the former and current judges, Al-hajji Moses Kigongo, Jabel Bidandi Saali and speaker of parliament Rabecca Kadanga among others.
Also the continuation of presenting of Nalubale medals to those who assisted in the Liberation war was today extended to a number of people from the Rwenzori region. Mzee Francis Kabaseke, the Father of Rev. Fr. Francis Assimwe of Nsenyi Parish was among those who were decorated with the Nalubale medal.
Among those who received are the members of the Katebwa-Kyabarungira war veterans, Ivan Walemba who participated in the Constituency Assembly, Semu Mukirania, Tom Byasaki, and James Rwakilembe among others.
Among religious leaders, Bishop Egidio Nkaijanabwo of the Catholic Diocese of Kasese and Pastor Ezakiel Mutwanga the executive Director of the South Western Uganda field of SDA church received the Nalubale medals.
Posted by Kasese District News at 17:10 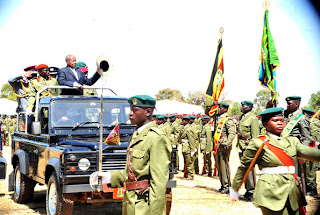 Ugandans have yesterday marked the twenty seventh liberation anniversary of the National Resistance Movement at a colorful national function held at Nyakasanga playground.
President Yoweri Museveni who was the chief guest said Uganda has slowly developed due to lack of enough industries that would create employment and foreign exchange through exportation of finished goods.
The president said that such delays have affected the privatization of Kilembe Mines limited for the revamping of copper mining and smelting in Kasese district.
Mr. Museveni told thousands of people at the ceremonies that Corporate Privatization Unit has misapplied procedures through confusion of whether what is needed for Kilembe Mines is a procurement process or only investment promotion.

Mr. Museveni said that there is a group of Chinese investors who have been in the country several times in the past two years with an interest of taking over at Kilembe Mines so that they build a copper industry but have been tossed out several times.
Mr. Museveni also pointed out the delay in the equipping of the army and corruption as other factors that have contributed to a slow economic development of Uganda.
He said the whole country is now peaceful because since 2001 the army has been equipped to flash away the different rebel groups like the Lord’s Resistance Army and the Allied Democratic Forces.
He asked the people in the Rwenzori sub-region to forget about the ADF threat but rather concentrate on the cultivation of coffee and apples to enhance their household incomes and kick poverty worse and for all.
On corruption, the president said the sympathizers of the NRM government and the young police officers for breaking what he called “a racket of suspected thieves” in the different ministries in the country.  He said that corruption cannot be fought by activists and politicians shouting over the media without arresting any suspect.
Mr. Museveni also attacked the judiciary for indiscreetly giving out bail to every suspect of corruption because such deals the government a blow in fighting the vice.
Posted by Kasese District News at 17:00

Security agencies in Kasese are investigating reports that four Ugandans were allegedly shot dead in DR Congo on New Year’s Day and buried in a mass grave.

It is alleged that the four were murdered by an armed group in Kasindi Village in eastern DRC near Mpondwe border post.

Notable among those suspected to have been killed is Deogratius Kyoghero, a teacher at Bwera Secondary School in Kasese District.
Kyoghero is a former deputy minister for local administration in charge of documentation in the Rwenzururu Kingdom.

The Kasese District Chairman, Lt. Col. Mawa Muhindo, said it is uncertain whether the bodies of the victims can be retrieved from DRC for a decent burial in Uganda because of the diplomatic issues around their death.
“It is uncertain that we as Ugandan authorities can convince the Congolese government to exhume the bodies and bury them in Uganda. Their mission is not known at all and no one can tell what they went to do in DRC,” he said.

Lt. Col. Muhindo said his office received reports about the incident on January 3, with allegations that the deceased were found with fire arms, dressed in military attire and allegedly had Congolese identity cards.
This newspaper could, however, not independently confirm these reports by press time.

Lt. Col. Muhindo said there are allegations that the group might have been on a criminal mission or trying to join negative forces fighting the government of President Joseph Kabila.

There are many militia groups fighting the Congolese government in the war-ravaged eastern DRC.

The UPDF has continuously announced that remnants of the Allied Democratic Forces rebels have been regrouping in the DRC with the aim of re-attacking Uganda.

The UPDF’s 305 Brigade spokesperson, Lt. Ninsiima Rwemizuma, said information about the incident was “still scanty at the moment”.
Mr Kyoghero’s family in Kitholhu, a sub-county that lies on the Uganda-DRC border, on Saturday held funeral rites in honour of their fallen son.
A family elder, Mr Simon Baluku, said the family had nothing to do but to hold prayers and funeral rites because it was already confirmed that their son died under unknown circumstances.

Lt. Col. Sejabi said security personnel in Uganda are doing all it takes to retrieve his body from DRC where it was buried but added the mission is not yet successful.
He said intelligence reports reveal that the victim was linked to Allied Democratic Forces rebels who have been regrouping in Congo.
Posted by Kasese District News at 16:47