By; E-Society
Rwenzori Information Centre Network (Ric-Net) in conjunction with Rwenzori Consortium for Civic Competence (RWECO) all operating in the Rwenzori region has been carrying out sensitization to improve students participation in English language through various activities like training English teachers in computerized teaching.

This time round Ric-Net invited various schools to participate in Easy writing, poetry and painting under the themes “How adequate have the government interventions in boosting Agriculture and education sectors been in light of the different, NAADS, USE and UPE initiative”, Art and painting under “A child friendly environment”.


Many schools were invited in Kasese District and only a few participated. among those which participated, only schools of Mutanywana S.S, St. Thereza Girls S.S, Kilembe S.S, St. Charles S.S, St. Johns P.S Maliba and Bwera Dem Sch. managed to excell in a few items. Mutanywana emerged the best over all performer followed by St. Thereza Girls which also had the over all best student in Essay writing. Best participants were rewarded with certificates, and a few scholastic materials.


On delivering certificates to all the participants in the above schools this week by the RIC-NET staff the students, pupils and teachers were filled with joy and happiness receiving good news of harvest.
Different teachers in different schools expressed their happiness to Ric-Net
for having intervened in the Education sector and motivating the learners to join such competitions.

Posted by Kasese District News at 19:42

Kyegegwa District yesterday 24.10.2013 has an exchange study visit to Kasese E-Society Resource Centre.
This comes after a new E-Society Centre having been introduced and setup in at Kyegegwa Disttrict Local Government and facing.

The E-Society is a District ICT facility, a point for citizens access, share and disseminate information in local governance and service delivery with a view of having a poverty freesociety using ICT.
The Centre is now one year old. this called for the District Officials visiting the E-Society Centre of Kasese which is now 3 years old to pick a leaf on how best they can run that of kyegegwa. 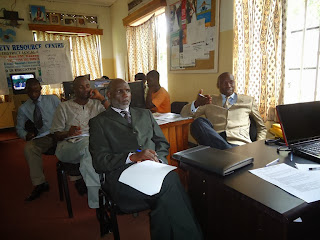 A four people delegation composing of the Deputy LCV, Planner, ACAO and the ICT focal person was received in Kasese by the ACAO administration, the Information Officer, the ICT Officer and the Hon. counselor secretary for social services. The visit was educative where the DIO made a presentation showing the background and achievements of the E-Society in Kasese.

The visitors appreciated all the moves and promised to impress and implement ICTs in Kyegegwa through the E-Society
Posted by Kasese District News at 08:17