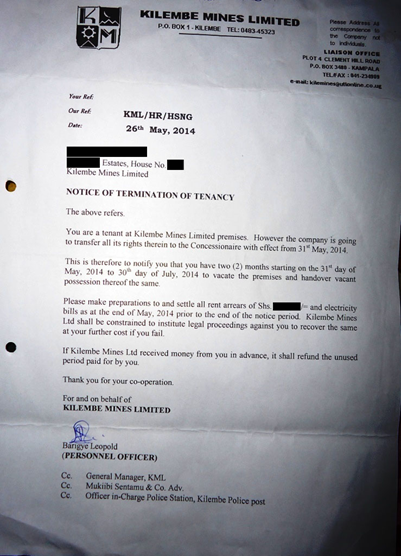 The entire Kilembe mines community was caught off guard. First, rumors about the impending demise of the houses which most of the community members had called home for so long were spreading from all over. Then the inevitable happened, as of April 2014, every tenant was served an eviction notice, some receiving them earlier than others. A copy of the eviction notice we obtained precisely stated 2 months for the tenants to vacate the premises and legal action by Kilembe mines Ltd against tenants that do not settle their arrears before time. However, on interviewing some of the residents of Kilembe on what they felt about the developments, resentment towards leaving, betrayal and hopelessness were echoed in most of their concerns. “Kilembe has been our home for over 20 years”, said one elderly man living in the Chanjojo estate of Kilembe, “to evict us with notices like unworthy tenants is very disappointing”, ranted the man. Kilembe mines Ltd was officially sold by the Government of Uganda to developers who intend to tear down the old buildings that are the estates and erect more modern housing units in their stead.

Posted by Kasese District News at 22:44

Rape and Defilment cases on an increase in Kasese


By Samuel
Story By Edward

The Kasese District Mediators Association (KADIMA) a nongovernmental organization operating in Kasese town has reported increased cases of rape and defilement among minors in Kasese district.
The Programs Coordinator for KADIMA Asumani Mwesigye told our reporter yesterday at his office on Mukirania Street in Kasese town.

Asumani singled out the sub counties of Mukunyu, Kyalhumba, Bwesumbu, Buhihira, Maliba and Kyabarungira among others where he said cases of defilement and rape were escalating.
He revealed that in a month, between eight to ten cases of either defilement or rape are always reported in the above sub counties.
Asumani noted that the community members in the outlined sub counties lacks much of civic education on how best they can condemn cases of rape and defilement in their various communities.

Meanwhile, police officer in charge of family and child protection unit Kasese Police station Zebia Kabugho has expressed concern over the increasing number of child abuse and negligence across the district.
Ms Zebia said that the rate at which child abuse and negligence case were being reported at Kasese police station was worrying.
She encouraged leaders, police and other nongovernmental organisation to double their efforts by sensitizing the masses on possible dangers of the vice adding that most family members have relaxed to execute their duties to the expectations.
Posted by Kasese District News at 11:24

By Samuel
Story By Edward

The people of Kasese have been challenged to impress and support the fourth coming 2014 census since it’s for the good of all Ugandans.
This was disclosed by the Kasese District vice Chairperson Tadeo Muhindo during a publicity stakeholders meeting held in the District council hall at Rukoki, in Kasese town.
He encouraged the people of Kasese to impress the exercise despite subscribing to the various tribes in the district. He said that they don’t want politics, stereo typing and prejudice during the census exercise.

The deputy RDC Kasese Mr. Aminadab Muhindo said that it was very unfortunate that census is two year’s late but quickly added that all people should impress the exercise to help Government properly plan for all the people in the area.
The 2014 census is organised under the theme “counting for planning and improved service delivery, with a slogan “together we count”.

The Kasese District planner Mr. Alex said they have received all the materials needed to be used during the census.
He encouraged all the people of Kasese impress the program adding that the results of the census are important to every Ugandan.
The ten day Census is slated for 28th-6th. August this year.
The meeting chaired by the Kasese district Chief executive officer Mr. William Kanyesigye attracted various religious leaders, managers of radio stations including the President of the 7th day Adventist Mr. Mutwanga and the director Kasese Guide Radio Rev. Fr. Sunday Augustine Masereka among others.
Posted by Kasese District News at 11:14

By Samuel
E-Society
The General Court Martial sitting in Kasese today has adjourned until 5th August. 2014, the 53 July 5th suspected attackers on Government installations, and civilians in Kasese District.
The Court session was presided over by the General Court Martial chairperson Maj. Gen. Levi Karuhanga at the Rwenzori square in Kasese Town.
Prosecution alleges that the 53 suspects, while in Bigando village in Kitswamba Sub-county and at the weighbridge near KCCL on Mbarara-Kasese highway, killed twelve and one person respectively.

It’s also alleged that the suspects in their attack on Police road block at KCCL took off with unspecified ammunitions contrary to section 119 sub-section one of the UPDF act No.7 of 2005.

Prosecution preffered charges of Murder and attempted murder against the suspects.
Also sent on remand are seven officials from the Rwenzururu Kingdom who include the Prime Minister Rt. Hon Noah Nzaghale, the Kingdom Spokes Person Joshua Baluku and the Minister for Native administration Hon. Yolam Mulima for allegedly inciting the ethnic Violence.
Court did not allow the Civilian Lawyers to represent their clients on grounds that they had not submitted their applications forms to the Court Registrar.

However, Government had hired advocates for the suspects who will work together with Sibendire and Tayebwa Company Advocate and Masereka chans.

Posted by Kasese District News at 21:22