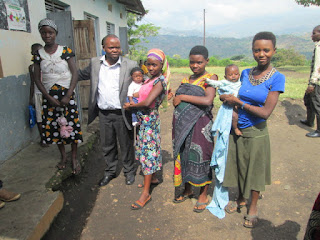 KASESE: The Kasese district chairperson five has threatened to arrest husbands to the teenagers following the increasing early marriages in the district which has increased the number of female dropouts in the district.
Basing on the Research gathered in the district indicate that, teenage pregnancy is reported to be on increase especially in Kitswamba sub-county, Busongora north in Kasese district which leaders suspect to have been caused dues to much freedom rendered to the male youth which urge them to marry at an early stage.
“The youth in this district have much freedom since their parents have failed to talk to them and direct them in the right way which could enable them see a bright fight not looking at marriage as the only way of achieving in life, by arresting husbands the rest will learn and fear to engage in such useless early marriage issues” Sibendire bigogo the district boss threatened.
During several abrupt visits to Kitswamba Health Center III in Busongora North constituency, the district leaders were shocked by the big number of teenagers who had thronged the facility for antenatal care.
Kasese District Chairperson Sibendire Bigogo Geoffrey Thembo had subsequently criticized the high rate of early pregnancy in the area and called for an immediate sensitization of the people, especially the men in the area.

Bigogo told monitor reporters that he was shocked to find out that girls of between 14 to 16 years were having three or more children.

“I guess these girls were actually defiled” According to Bigogo,.
In Uganda, 24% of all female teenagers are either pregnant or have given birth already. 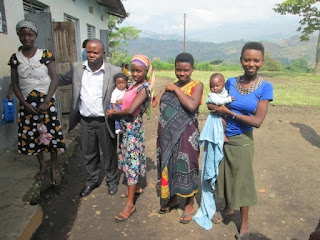 Uganda also has the one of the world’s highest fertility rate, with the annual growth rate of 3.5% per annum.
Bridget Biira 18 years and a mother of three children said that she was defiled at the age of 16 while she was in primary six.
A midwife at the facility told our reporter that, at least 15 young girls are received daily for antenatal care.
A section of residents attributed the problem to scarcity of water which they said forces many children to trek long distances in search of water.
Swaibu Mujungu, a teacher at Kitswamba SDA primary school said that young girls in the area were being waylaid by people luring them into immature relationships.
However, Yusuf Mugoba blamed his fellow parents for their alleged failure to monitor their children’s movements.
Simion Kisarali and his wife Grace Biira who were met at the facility for antenatal care urged teenagers to always go with their husbands whenever they attend antenatal care.
According to United Nations, each year roughly 7.3 million girls give birth when they are below the age of 18, and two million of those are younger.
The rate of pregnancies in adolescent girls has started to fall in many developing countries but remains a stubborn problem that damages girls' health and hinders economic productivity.

Posted by Kasese District News at 12:53 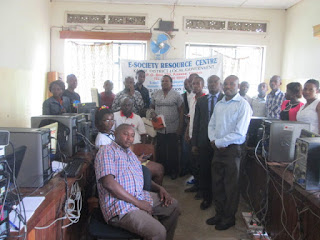 KASESE: The Kasese district deputy chief administrative officer Lillian Kobusinge has ensued censorship to the media on information flow concerning the district.
Speaking on the orientation training organized by the Kasese E-Society ICT centre in partnership with The Collaboration on International ICT policy in East and Southern Africa (CIPESA) aimed at equipping ICT participants with knowledge on how to access relevant public information and using ICTs to monitor and report service delivery issues.
Kobusinge who was this afternoon of Friday opening a one day orientation training of media practitioners and civil society groups in the district at Kasese district E-society centre, emphasized that any information concerning the district must be approved and sanctioned by the district chief administrative officer.
The deputy Chief Executive officer, urged the media to always seek clarification and comments from the CAO’s office on any newsworthy matter involving the district.
She called for observance of the access to information act by the media practitioners and objectivity in their media reports as these will help eliminate bias in the course of news broadcast. 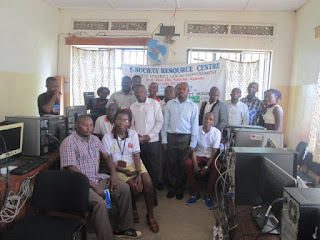 The Kasese district information officer John Thawithe noted that everyone has a right to information access but in line with the rule of law.
Samuel Mumbere one of the facilitator urged all media practitioners to utility the resource centre to get quality information which can build the society,
He further noted that the district is ready to support any media house which will continue updating the public on several government programs.
END
Posted by Kasese District News at 13:37 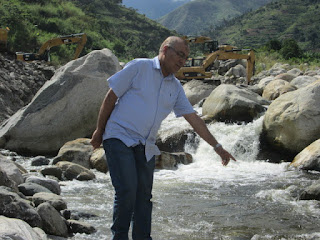 KASESE: A 95 Billion Project of Mitigating Kasese floods by Arab contractors has commence on river Nyamwamba to reduce on the daily suspected periods of flooding of several rivers channel in Kasese district which will take nearly six months
“ This contract was awarded to Arab Contractors Company at a tune of shillings 95
billion (2715622$) and it’s to be finished in a period of five months” Eng. Mohamed Eldesouky the resident eng. from the government of Egypt said in an interview.

The five months project of protection works for flood mitigation in rwenzori sub region, Kasese district which is funded by the Egyptian government under the ministry of water resources and irrigation was delayed by security threats resulting from the November 2016 Kasese clashes that left hundreds of people killed at the obusinga bwa Rwenzururu palace.

The retraining works are centering on excavating and de-silting of the river channels at some identified hotspots to remove stones and other debris from the main stream of Nyamwamba river to flush floods effectively. 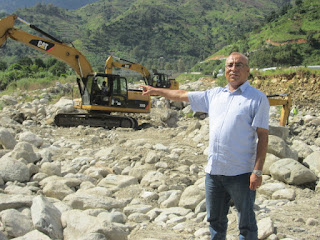 According to Eng. Mohamed Eldesouky the residents engineer for Arab contractors, said they want to de-silt the upper stream of river Nyamwamba as a mitigation measure to avoid accumulation of debris that may limit the river channel capacity during floods.

Eng. Mohamed said that, after cleaning the river channel, they will put gabions on the river banks to protect the most vulnerable sections along Nyamwamba River where flow
velocities are extremely high.

“Our mitigation interventions will be carried out on three most severely affected areas along river Nyamwamba that is to say, road barrier primary school, Kilembe mines hospital, Bulembia primary school,  later on katiri school and the church shall be added”  Eng. Mohamed added.

He noted that the main problem has been the blockage of some cross sections of river Nyamwamba which couldn’t accommodate the proper flow of the river adding that they are now digging it ten meters deep to give the river enough space for water flow.

“We started our role almost one and half week ago at the site of Bulembia primary with about four excavators working on removing of stones from the water mainstream channel then thereafter we shall descend to Kyanzuki Bridge up to Kilembe hospital”, Eng. Mohamed further added. 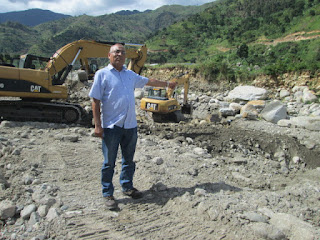 The retraining process was welcomed by the Kasese municipality parliamentary legislator Hon. Robert centenary who praised the Egyptian government for the funding geared towards saving lives and properties of Kasese residents.

“Am very glad that the project of rechanneling river Nyamwamba has finally commenced and this is a very big step by government in saving lives of communities around river Nyamwamba especially Kilembe mines hospital, Bulembia, Katiri and road barrier primary schools”, Centenary told daily monitor in an interview.

Flooding has happened twice leading to the closure of Kilembe mines hospital that was in May 2013 and May 2014 following destructive floods that ravaged the entire hospital buildings and causing displacement of patients.

The floods were triggered by a heavy downpour that caused River Nyamwamba to burst its banks.

According to Rev. Sister Theopista Basemera the Kilembe mines hospital senior administrator, the current construction works on river Nyamwamba is a big relief to the hospital looking at the turbulent situation the hospital went through during the previous floods.
Sr. Theopista narrated that, they have been living in fear of fresh floods invading the hospital any time because of the current rainy season experienced in the district.

“For the last three years from 2013 to 2015 we have been experiencing floods whereby sixty four houses at the hospital were washed away by floods, we are now very happy that construction works have began and now we are assure that looking at the work being done, floods will not affect our hospital anymore,” Sr. Theopista said.
Utilities:
At least during every rainy season for the last four years, River Nyamwamba which is situated on the slopes of Rwenzori Mountain bursts its banks, leaving behind a soar of destruction of lives where over nine people were reported dead and properties worth millions of money destroyed.

The river channel is now being constructed with protective bearers against destruction of schools such as Bulembia and road barrier primary schools which have for the last four consecutive floods suffered a tale of destruction including Kilembe mines Hospital which
nearly closed during the 2014 Kasese floods.
End.
Posted by Kasese District News at 19:11