The main rival political parties in Kasese district, Western Uganda, have resolved to shelf their bickering for the sake of rebranding the district and harnessing the huge investment potential of the area.
They made the resolution on Saturday at a day-long meeting brokered by the national chief coordinator of Operation Wealth Creation and  President Yoweri Museveni’s younger brother, Caleb Akandwanaho, aka Salim Saleh.
It was co-chaired by Catherine Muhindo, FDC  Vice chairperson and district secretary for production and Fred Businge, the acting chairperson of the ruling National Resistance Movement(NRM), Fred Businge.
The participants, numbering more than 250, also included religious and cultural leaders, the private sector, representatives of the district elder’s forum, and leaders of various NRM and FDC structures. 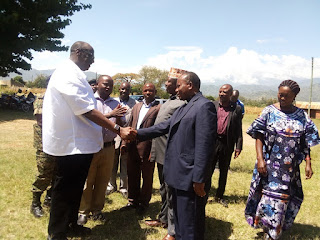 Endorse Shs119.550b investment plan
At the meeting, held at the district multipurpose hall opposite the Kasese aerodrome, a technical team, headed by the district planner, Alex Masereka presented a District Investment Plan, worth Shs119.550b, which they all unanimously endorsed.
The plan, whose goal is to propel the district into the middle income status by 2021,  prioritises  the exploitation of minerals, tourism, the abundant rivers for irrigation, lakes, crater lakes and the flat agricultural land.
It also aims at investing in the coffee, cotton, maize, rice, livestock, and fisheries.
The plan also advocates for a viable investor to revamp the defunct Kilembe Mines Ltd and the Katwe Salt Lake Industry.
Women youth and the elderly across the district will also be supported with cottage industries.
The pan also seeks to harness the hydropower potential and improve roads, markets and address environmental hazards as well as develop a sports complex.
According to Fred Businge, the Saturday meeting was a culmination of a series harmonization meetings chaired by Salim Saleh who has been pitching camp in the district for several weeks.
“I am happy that I have achieved this day. You have given me mileage,” Salim Saleh said while closing the meeting.
He urged the stakeholders to aspire to market the district investment potential in the Rwenzori Mountains and in the planes and to develop a communication plan to do so.
He hailed the Rwenzori sub-region for having contributed to the country’s liberation but noted that disunity had made the area lag behind in development.
Funds guaranteed
Gen Saleh revealed that the Ministry f finance had processed a certificate of Financial Implication for the required fund but strongly advised the district to ensure absorption.
He challenged at stakeholders – the clergy, the clan leaders, government functionaries, civil society and the private sector to work together.
The acting Prime Minister and chairperson of the inter-ministerial commission, established to handle the embattled Obusinga Bwa Rwenzururu (OBR) issues, Gad Mbayahi, described the Saturday meeting as his “long-desired wish.”
He lashed at leaders who oppose development ideas suggested by those of the opposite political sides.
“Kasese isn’t a bad place but it is run by people who want to use it as their selfish business projects.
“I am glad this has happened. Today I am not interested whether you are FDC or NRM because we are here for the common development of the Rwenzori,” said the district LC5, Geoffrey Sibendire Bigogo.
The district vice chairperson Gideon Ntabose, (FDC), termed the meeting as historical
“I have never seen people of different political parties come to the same table in this district,” said Ntabose, who is also represents the youth on the District Council.
He warned fellow politicians to desist from resisting developmental ideas from leaders of other political parties.
“This meeting should teach us that when a member of the opposite party talks of development and service delivery, we should be supportive,” he said.
Ntabose also warned leaders and other residents against utterances and actions that can repulse tourists and investors.
He implored government to also invest in the reconstruction of the Rwenzururu palace, burnt in 2016, release the king and market it as one of the tourist attractions.
The Deputy Resident District Commissioner, Joshua Kisembo Masereka, revealed that some people had attempted to fail the meeting.
He blamed the slow pace of development on the politics of lies and cheap popularity.
“We all made mistakes. It is time we woke up and stopped lamenting and sitting on ourselves,” Godfrey Kabyanga, the Mayor Kasese Municipality, advised.
What others said
The councilor representing persons with disabilities in the district council, Pelucy Kabagenyi, called for affirmative interventions for her category to avoid marginalizing them in the implementation of the multi-billion investment plan.
Lhusenge Thembo, a musician-turned politician complained that the local artistes were sidelined in the district and called for a special fund.
Former Kasese woman MP, Loice Biira Bwambale, asked the planners to mainstream apiary to prevent the queen Elizabeth national park animals from invading gardens of the neighbouring communities but also to harvest honey for economic development.
Seddress Masika Kalengyo, called for interventions to combat plastic waste known, especially as kavera (polythene bags), saying they were becoming and environmental hazard in the district.
Retired South Rwenzori Diocesan Bishop, Zebedee Masereka, cautioned the district to develop an operation and maintenance plan for the pants and equipment being requested in the plan.
Retired resident District Commissioner, Barnabas Bamusede Bwambale, called for technologies to
turn the maize stalks and into hay and silage.

Maize is one of the widely grown crops especially in prison farms in the district.
Posted by Kasese District News at 15:47